With pilgrims coming, Uman’s ‘miracle’ refugee shelters will be forced to clear out

UMAN, Ukraine — On day 152 of Russia’s invasion of Ukraine, the hotels in the heart of Uman’s Jewish district are full. Laughing children run through the hallways, hot kosher food is served three times a day under the strict watch of a supervisor, and hundreds gather for Shabbat meals.

The vast majority of these families enjoying challah and kugel minutes from the grave of Rabbi Nachman of Bratslav are not Jewish.

As frightened Ukrainians fled the Russian onslaught in the early days of the war, hundreds found themselves in this central Ukrainian city that also happens to be a major Jewish pilgrimage site.

The stories from the refugees who ended up finding food, shelter, and a sense of security among the Jewish community in Uman almost leave one with the sense that it wasn’t quite coincidental that they ended up in this city, of all places.

“There were three cars of us. My parents in one, us in the other one and my sister in the third car,” said Inna Karsonlov, a schoolteacher who fled Russian-occupied Kherson in late April with her husband Dima and two children. “And we just started looking for places to stay,  we were just calling everywhere we could find. And we were even considering sleeping in the car.”

The Karsonlovs had spent weeks under the thumb of Russian soldiers, being stopped for searches and living under constant fear that their 18-year-old son would be impressed into the Russian military. Their escape took days, as they repeatedly found roads blocked after waiting in lines for many long hours. 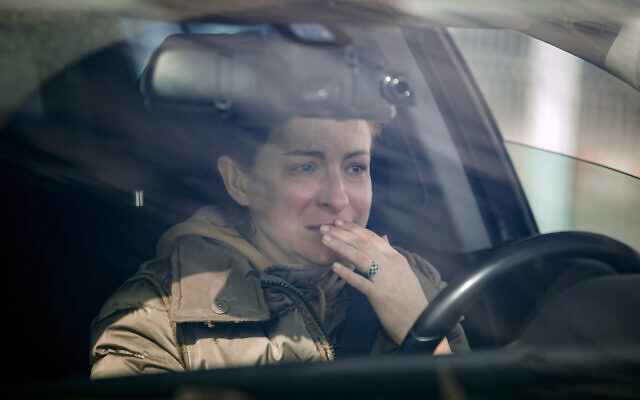 A woman weeps in her car after crossing the border from Ukraine at the Romanian-Ukrainian border, in Sighetu Marmatiei, Romania, Friday, Feb. 25, 2022. Thousands of Ukrainians are fleeing from war by crossing their borders to the west in search of safety. They left their country as Russia pounded their capital and other cities with airstrikes for a second day on Friday. Cars were backed up for several kilometers (miles) at some border crossings as authorities in Poland, Slovakia, Hungary, Romania and Moldova mobilized to receive them, offering them shelter, food and legal help. (AP Photo/Paul Ursachi)

“And it was like a miracle,” she continued, “the last number we called, we reached here and they were like ‘Yeah, you can just come in and we’ll figure it out on the spot.’… So we came in here late at night and we were looking for a place to stay. And luckily we found this place.

“They gave us food and they gave us shelter. They gave us a place to stay. So we were just greatly surprised, everything was very easy here. And so, it was just a miracle,” said Karsonlov.

Ruslan, a refugee from Druzhkivka in the Donetsk region, fled with his family two weeks earlier. 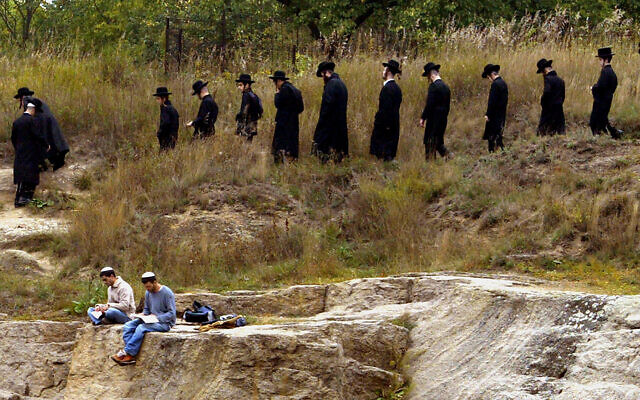 “We left our city without a destination, so to speak,” he told The Times of Israel on Monday, speaking from the porch of the Orot Hotel on Pushkin Street. “So we were just going and it turned out we were near Uman late at night.”

Ruslan said it was an accident that they ended up in the Jewish area. “We googled the center and the algorithm just brought us through here.

“So we stayed for a night, and then on the next day we were offered a place to stay.”

‘We are showing them our tradition’

The idea of hosting refugees in the kosher hotels came to Liron Edery, the rabbi of the city of Kyrvyi Rih, when he was in Uman for Shabbat in the first weeks of the war. 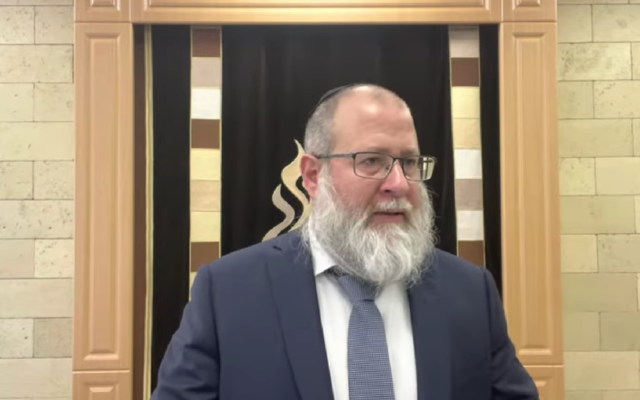 “I saw the flow of refugees there, and I understood we had to do something,” he said, speaking by phone from Israel.

The city’s geographical location meant it was a logical stopping point for civilians fleeing Russian advances in the Donbas, Mykolaiv, Mariupol, and Kherson.

“It’s a smaller city without any military infrastructure, stuff like that,” explained Ilona, a Kryvyi Rih resident who works for the Association for the Development of Jewish Communities of Ukraine, headed by Edery. “So it’s relatively safe to stay here. So a lot of people come in.”

The kosher hotels around Rabbi Nachman’s grave exist to make money for two weeks out of the year, the week before Rosh Hashanah and the week after. Edery approached some of the owners, and offered to cover electricity, water, and the upkeep costs they would have to pay anyway, with an additional 10 percent thrown in. The hotel owners were happy to accept the rabbi’s offer.

Edery also created a logistical center that has distributed over 2,500 tons of humanitarian supplies. 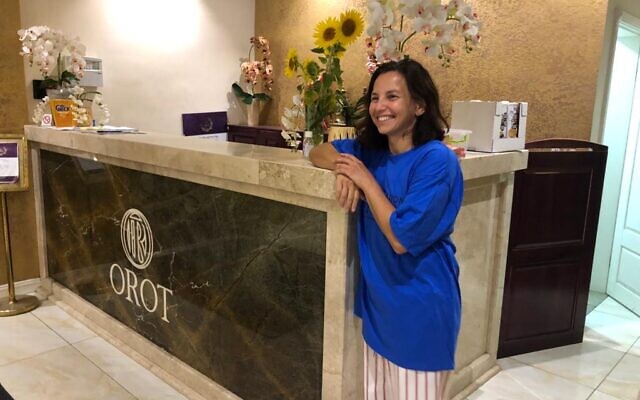 Ilona, a Kryvyi Rih resident who works for the Association for the Development of Jewish Communities of Ukraine, at the Orot Hotel refugee center, July 25, 2022 (Lazar Berman/Times of Israel)

Once the refugee center was established, word spread quickly, and refugees headed for the Jewish hotels in Uman.

“We were told that in Uman, it’s more secure and that there’s a center for refugees like this, that we can get help here,” said Anya, a mother from Donetsk.

“We knew it was Jewish,” she continued. “We were told specifically about this center.”

So in these unique wartime circumstances, dozens of non-Jewish families have been enjoying Shabbat meals and learning about Jewish traditions while they take shelter during a raging conflict.

“We’re treating them as our guests, and also we are showing them our tradition,” said Ilona, who recently returned from a visit to her parents in Netanya. “So we have Shabbat dinner, we tell them about our tradition. And on Saturdays also. So we make sure that we share our culture with them and treat them as guests.”

And the guests have enjoyed the experience, by all accounts. Ruslan has visited Rabbi Nachman’s grave twice, and Anya made her way to the old Jewish cemetery where Rabbi Nachman’s students are buried. She has even picked up some rudimentary Hebrew. 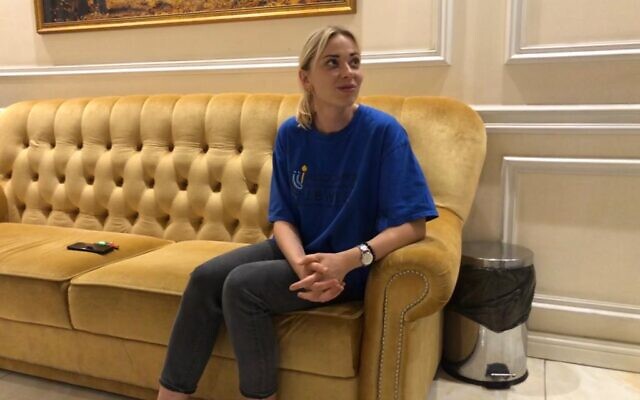 Anya, a refugee from Donetsk, at the Orot Hotel in Uman, Ukraine, July 25, 2022 (Lazar Berman/Times of Israel)

Some of the guests are discovering the relevance of Jewish practices to their own lives.

“This is definitely a different culture for us,” said Dima Kasonlov. “We’ve never experienced this before… And then we came here and we just experienced it firsthand, and we actually even took some things that are really useful into our life. For example, Shabbat. It’s a really great experience to just take a break from everything, to talk to people, to reconsider, and then keep on going again.”

He has taken his family to both Rabbi Nachman’s grave and the old Jewish cemetery. “We’ve read a lot about the history of this place, and we’ve experienced it,” Dima said.

They’ve even taken a liking to the chulent stew served at the Shabbat meals, a staple of Ashkenazi cuisine  “At first we were really cautious because it’s a different culture, it tastes different, you know, so it’s slightly different,” admitted Inna. “But now we love it.”

Edery, who has lived in Ukraine for 22 years, fully appreciates the value of Christian Ukrainians gaining familiarity with Jewish culture and individuals. 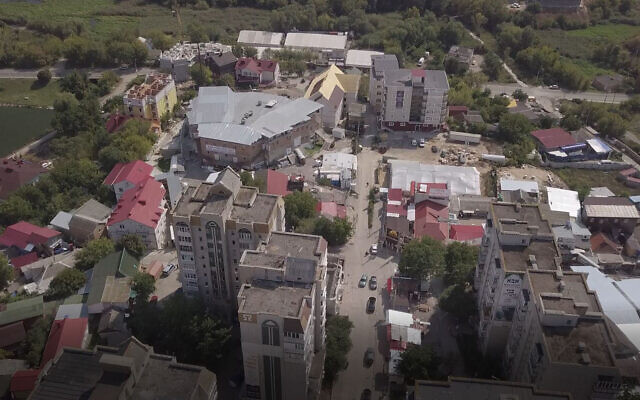 “People are afraid of the unknown,” he said. “The fact that they see that Jews are not that strange, there is a benefit. We have no goal of bringing people to Judaism. But the fact that people see that Jews have normal lives and are regular people, that’s important in my eyes.”

Around 150 refugees are staying at the Orot Hotel. The costs of food and shelter are mostly covered by the Moscow-based Chabad organization Federation of Jewish Communities of the CIS (Commonwealth of Independent States).

Beyond providing for guests’ basic needs, the staff also takes children on field trips once a month, and throws a party for every kid’s birthday.

The Kasonlov couple emphasized how thankful they are to the Jewish community.

“When we were fleeing our home, we were going into nothing, into nowhere, and here we were helped,” said Inna. “We were given a place to stay. We were given everything that we need to keep on living.” 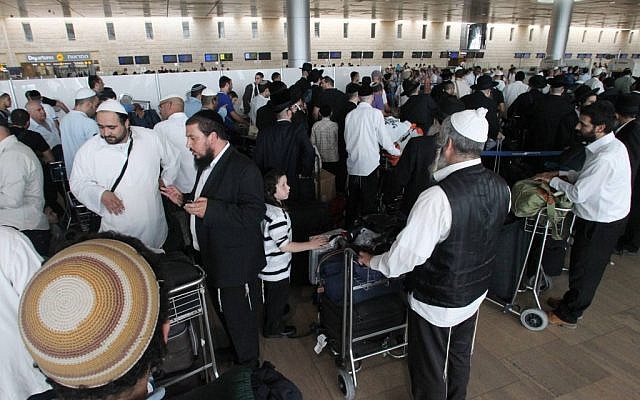 “And right now we’re doing what we can, we’re volunteering as well, but we have everything we need to survive and we feel that our future is gonna be okay,” she said with a smile.

But it looks like the unique refugee community on Pushkin Street will soon be forced to disperse.

Despite warnings from both Israel and Ukraine, thousands of Jewish worshipers are expected to make the annual Rosh Hashanah pilgrimage to Rabbi Nachman’s grave in late September, and hotel owners intend to open up to paying customers for the two weeks they get income from their properties. 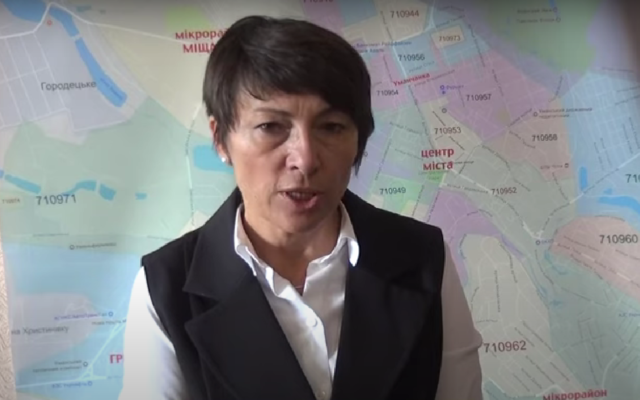 “Right now we have a problem,” she acknowledged. “We have to relocate the refugees for the Jews who are planning to come in for the festivities.”

Edery called it “a serious problem.”

“We are looking for a building. Right now we don’t have any options,” he lamented.

The city hasn’t found a solution yet either.

“As of now there are no concrete answers,” Pletnyova admitted. “We are currently learning the situation, we are working on what we can do, what we can solve. We are working on it on different levels, from the highest levels of government to the local community.”

She said that she intends to offer a plan by mid-August.

Right now we don’t have any options

The guests put on a brave face as an uncertain future approaches.

“We hope that by that time, our city will be liberated,” said Inna Kasonlov, “but if not, we’ll be somewhere around. We’ll watch the festivities.”

Out into the wilderness

And so, it seems that as Rosh Hashanah approaches, thousands of pious Jews will spend what little savings they have to make the spiritual pilgrimage to Uman in a time of war. They will be risking injury, and possibly worse, for the privilege of worshiping in a city whose soil has literally soaked up the blood of thousands of Jews in 1768, 1919, and 1942.

Their determination to reach Rabbi Nachman’s grave every Rosh Hashanah has revived the 300-year-old Jewish presence in Uman, even after Cossacks, Nazis, and Soviets tried to snuff it out. 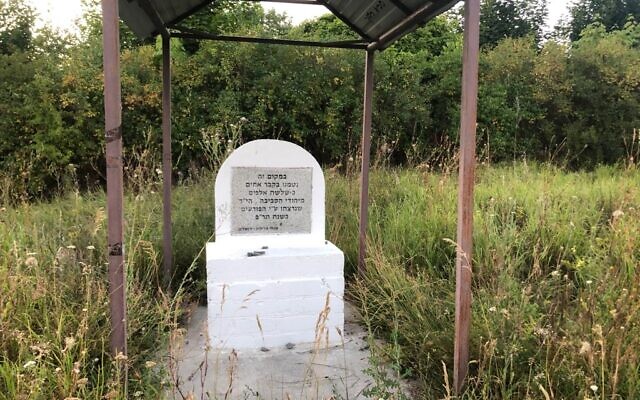 But in so doing, they may inadvertently turn hundreds of refugee families back out into the streets, to search again for food and shelter in a country fighting for freedom from foreign domination.

On the first day of Rosh Hashanah, the Jewish pilgrims will read from the Torah the account of Abraham reluctantly sending Hagar and their son Ishmael out into the arid wilderness, in order to protect his heir Isaac. They will read about Hagar placing her son under a bush when their waterskin is empty, sitting a distance away so as not to watch her son perish.

And they will read about God hearing the voice of the child, and sending an angel to show Hagar a well in the desert.

Perhaps Rabbi Edery and Mayor Pletnyova will find another building in which to house the refugees.

Or perhaps the families will have no other option but to raise their voices and hope for another miracle as they set out a second time into the unknown.