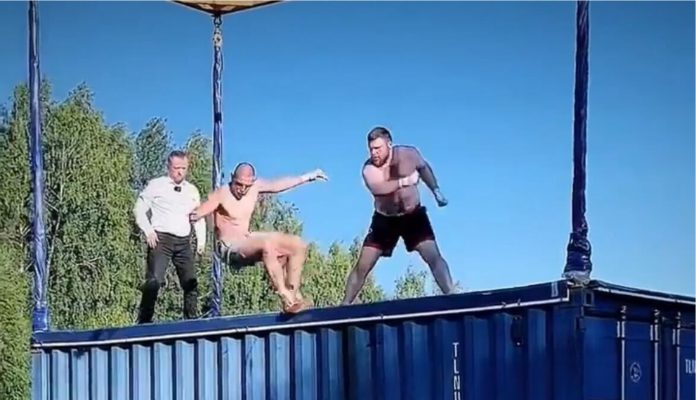 A new Russian fighting promotion will see fighters square off on a shipping container suspended over a body of water.

The fighters had their hands wrapped and boxing shoes on and went at it from there. It is a striking fight while the ref looks on from the edge of the shipping container. It’s a unique way to fight for sure and in the clip the promotion shared, the two fighters traded shots until one of them got knocked off the shipping container and had to swim to shore, signaling the end of the fight.

This is also not the first idea from Punch Club as the promotion also came up with ‘Punch Box’ which saw two combatants fight each other in a phone booth, which is a common phrase in fighting. However, it appears they now want to up the stakes even more and put the fighters on a shipping container above water.

As of right now, there has been no official event for Punch Club but in the social media post, they put soon you will see the full version on the channel. Although no known fighters will take part in this, there’s no question fans will flock to watch this at least once.

It also appears to be bare-knuckle boxing and with only strikes allowed and limited room to move, the fights will be full of action at Punch Club. Yet, there are still many questions that are unanswered like how many rounds/minutes will the fights go for, when they will have their first event, how fans can watch, and others. But, the promo has brought excitement to them, at least for the first event.

What do you make of this newest promotion from Russia and will watch at least one fight? Sound off in the comment section, PENN Nation!

This article appeared first on BJPENN.COM