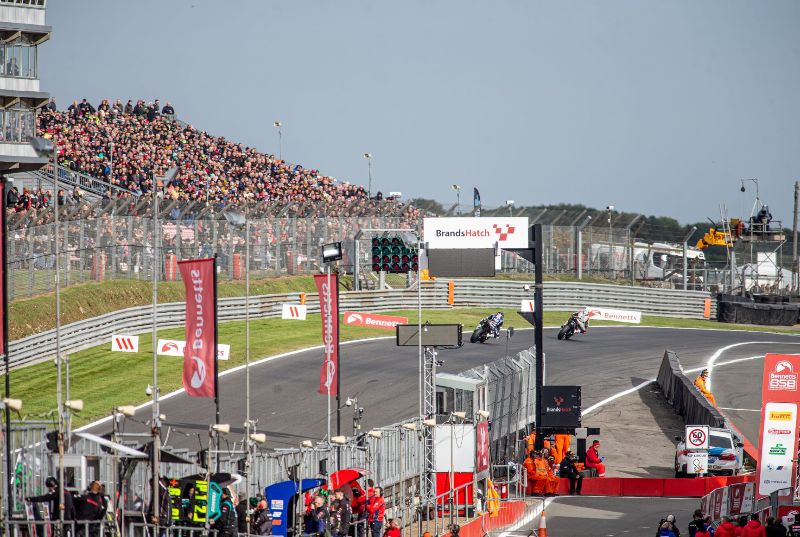 The Bennetts British Superbike Championship returns to Brands Hatch this weekend (22-24 July) for round five as the title fight hits the halfway mark ahead of the Showdown. Kent’s Bradley Ray holds the advantage at the top of the standings ahead of his local event, as he aims to keep the momentum going in front of his home crowd.

The Rich Energy OMG Racing Yamaha rider holds a 16-point lead ahead of the next three races this weekend having delivered his best start to a season, claiming three wins and a further seven podium finishes. However, McAMS Yamaha’s Jason O’Halloran is closing rapidly and he’s currently riding the crest of a wave after a double victory at Knockhill carried him to second in the standings.

The ‘Team Green’ counter attack though comes thick and fast from Lee Jackson and Rory Skinner as the Cheshire Mouldings FS-3 Racing teammates lock out third and fourth in the standings courtesy of their podium finishing form so far.

Kyle Ryde on the second Rich Energy OMG Racing Yamaha holds fifth in the standings and will be gunning for another win. He’s just ahead of Glenn Irwin, who is aiming to replicate the form that carried him to a Silverstone hat-trick at the start of the season.

Tommy Bridewell took the fight for the victories all the way to the chequered flag when the championship last visited Brands Hatch in 2021. The Oxford Products Racing Ducati rider will be aiming for nothing less than a fight for the podium at a circuit that has been strong for him in the past.

Danny Buchan completes the all-important top eight ahead of Brands Hatch; the SYNETIQ BMW rider holds a seven point lead over Josh Brookes; the rider who has won the most races on the Grand Prix circuit of the current grid. The MCE Ducati rider has yet to stand on the podium this season and his teammate Tom Sykes will also be eager to fire himself into contention for a Showdown position.

Reigning champion Tarran Mackenzie is returning to full fitness and the McAMS Yamaha rider has fond memories of Brands Hatch after his race wins last season took him to title glory. He will be hoping that a strong performance could get his title defence back on track after returning from injury.

“We are still leading the championship four rounds in and have been so consistent; we have only been off the podium twice all year and one of those was a crash out of the lead and the other one was a fourth at Knockhill.

“Consistency is obviously key this year and podium points are what we are aiming for at the moment. As everyone knows the Showdown in another four rounds’ time so we need to keep racking up as many podium points as possible because at the end of the day when we get to the Showdown, that is what is going to make the difference.

“It obviously feels nice to be leading the championship but I am not thinking about that too much right now, the most important thing is to secure our place in the Showdown and have as many podium points as possible going into the final three rounds.

“I am really looking forward to head to Brands Hatch for my home race, going into this round after such a strong start to the season bodes well and the Yamaha seems to work very well around the Grand Prix circuit.

“I think it will be a wicked weekend and it would be nice to be on the top step at my home round in front of my fans and family who come to support me. I am fit and ready and I can’t wait to try and carry on this season as we are – keep smiling and feeling happy!”